The July Recipe Redux challenge is a "spirited' one!

From plain Jane vanilla extract to fancy-pants elderflower liqueur, we like to keep a little liquor in the kitchen. Show us how you like to cook, bake or mix-it-up with spirits, extracts and other alcohols. A splash of vodka makes summer sauces shine – and liqueurs brighten desserts: What’s your healthy recipe with spirit? I love mudslides.  During the summer months we spend a lot of time in Ocean City, NJ at my parent's condo.  Years ago TGI Fridays marketed a mudslide mix.  We would whip up frozen mudslides at the pool deck pretty frequently with this mix.  One night we went to a friend's ice cream shop after closing and mixed in soft serve ice cream, yum!  For this months challenge I wanted to create a dessert using the common ingredients found in a mudslide:  Kahlua, Vodka, and Bailey's Irish Cream.  Mudslides are packed with calories we don't need, so I didn't want to create a dessert that would be high in calories either, especially since I am supposed to create "healthy" recipes.  Using non fat milk, no eggs, and smaller serving containers you can enjoy a yummy dessert without a lot of excess calories. Placing the pudding into shot glasses allows you to control the portion size and control the calories.  One shot class is just enough to satisfy your sweet tooth! 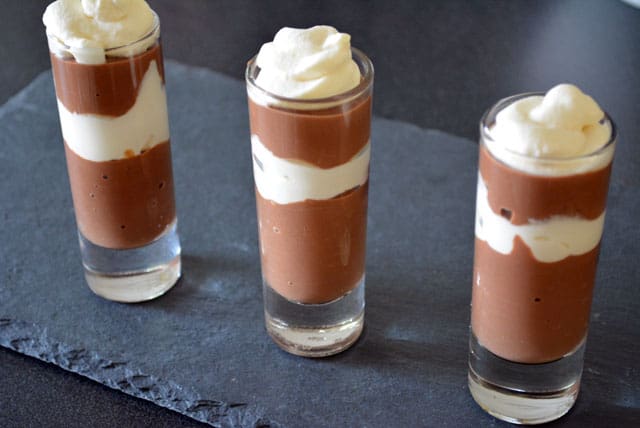 Jennifer Lynn-Pullman
You can get about 8 servings from the pudding recipe. The whipping cream recipe will yield about 16 servings since you are using less of this in the shot glasses.
No ratings yet
Print Recipe Pin Recipe Save Saved!
Calories 0 kcal