This warm gooey baked spinach artichoke dip is so easy to put together for any party. No need to open store-bought dip again!

Dips are my go-to choice for parties.  You can make several dips to satisfy anyone's taste.  We aren't a fancy punch.  At my in-law's house onion dip and potato chips are always in stock.  I think of spinach artichoke dip as being a bit more of a sophisticated dip. So when we need to step it up a notch baked spinach artichoke dip is on the menu rather than plain chips and dip!

[Tweet "When you need to step it up a notch baked spinach artichoke dip is so much better than plain chips and dip!"] 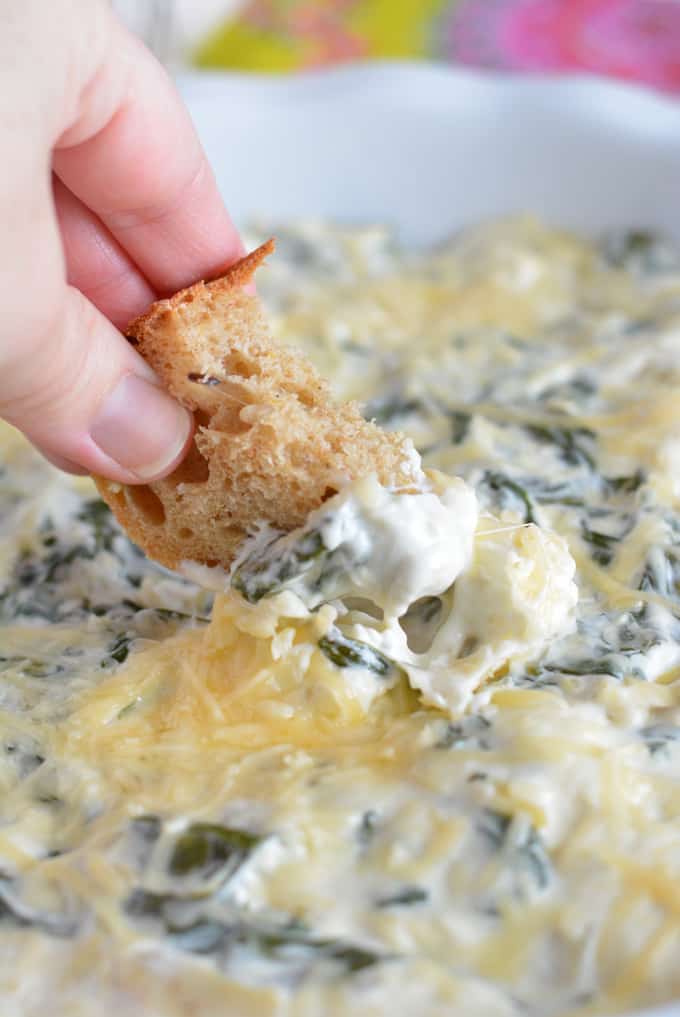 The original recipe that I tried when I made my first attempt at spinach artichoke dip used frozen spinach. I can't tell you how much a hate using frozen spinach.  My feelings have nothing to do with the nutrition content because frozen spinach is just as nutritious as fresh. What I hate is having to drain it and then squeeze the liquid out.  I'm never sure that I have squeezed the spinach enough! This is why I only used fresh. I also really don't like garlic powder, so there's fresh garlic in this recipe too.

I love to eat spinach artichoke dip with bread, but you can use any "dippers" that you want. The only issue with bread is that it fills you up pretty quick. Crackers would be less filling. Veggies, like bell peppers and celery, would be more nutritious. There are so many possibilities.

Sign up to receive my latest recipe sent to your email!