Twice baked potatoes can be used as a side dish or a meal on it's own. For this post I made the recipe a few times.  This was my son's first experience with twice baked potatoes and he really enjoyed them.  The second time I made this recipe for the photo shoot we ate them for lunch.  He said to me "I love potato month!"

Before baking the potatoes be sure to pierce the potatoes several times all around each potato with a fork.  This helps the baking process.  I also try to turn the potatoes at least once have way through cooking, however you could turn them more often if you wish.

My husband's parents actually microwave potatoes instead of baking them in the oven.  I have never tried this method.  I'm sure it's quicker, but I try to use the microwave as little as possible. After the potatoes are done they need to be cut in half.  The meat of the potato is scooped out in order to mash it.  Be careful.  I am always trying to get as much potato out as I can, but you don't want to rip the skin.  I got a little too close to the skin on one of the halves in the picture above. The mashed potato is placed back into the potato skins in order to be baked again.  You could get fancy and use a piping bag to fill the skins, but I just drop the potato back in.

You can use any type of cheese you wish.  I love cheddar cheese.  I like to you use orange cheddar so it stands out.  I also top the potatoes with bacon (I always use Applewood Smoked Uncured Bacon), scallions (you can use chives), and sour cream.  For extra protein you can replace the sour cream with plain Greek style yogurt. 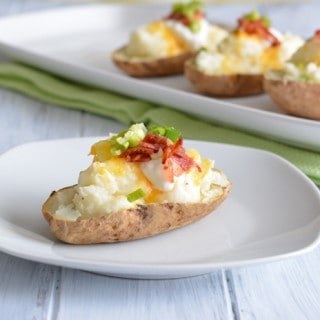