I was born and raised in Philadelphia.  Scott and I lived there until 2009.  I grew up eating cheesesteak sandwiches and can make a pretty good sandwich myself.  A classic steak sandwich consists of chopped steak on an Italian roll.  The steak is usually a thinly sliced rib-eye or top round beef.  The beef is cooked on a greased griddle, browned, and diced into small pieces with a spatula.  Newer versions use chicken for those who wish to avoid eating beef.  What about folks who want to avoid all meat?  Mushrooms have a "meaty" texture and are a great alternative to beef. The mushrooms need to be diced small to mimic the diced beef usually used in cheesesteaks.

Mushrooms are like sponges and can absorb the seasonings and sauces cooked with them. In Philadelphia most cheesesteaks are prepared using an Amoroso roll or a Vilotti-Pisanelli roll.  I grew up eating Amoroso rolls and they are available in every supermarket in our area.  Traditional cheesesteaks use a roll that is 12 inches or longer.  Amoroso makes a club roll that I always use for sandwiches because of its smaller size.  The club roll is about 6 inches. Onion, raw or fried, are a common topping for steak sandwiches.  I like my onions more carmelized then fried.  I cook them on a lower temperature for a longer time.  Other toppings include bell peppers, mayonnaise, lettuce and tomato (cheesesteak hoagie), tomato sauce (pizza steak), hot sauce, or ketchup. Toppings can be mixed in with the meat or added on top.  I like my onions on top. Homemade Whiz is better tasting then Cheese Whiz and easy to make. Cheese is generally melted over the meat and then added to the roll.   The roll is usually toated on the griddle.  I don't like to toast my roll though, so did not do this for this post. I will not eat a cheesesteak sandwich without ketchup! 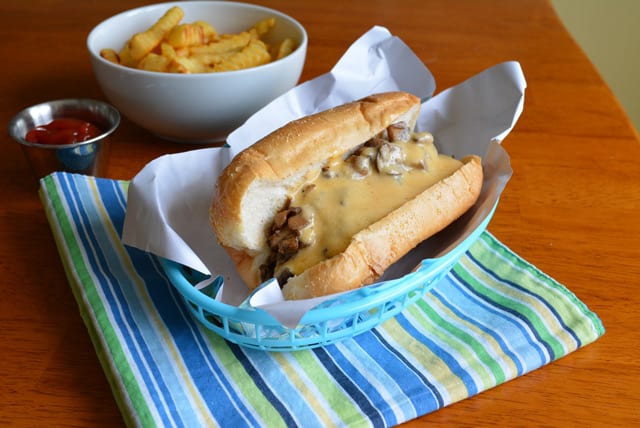