Sometimes I think that we have forgotten how joyful eating is.  With all the food rules imposed on us, we have lost the ability to feel the pure pleasure and joy of cooking and eating.  Recipes that bring back memories of loved ones can help you bring back that pleasure. The memories that come back to me when I make my grandfather's Homemade German pickles -Senfgurken is truly special. 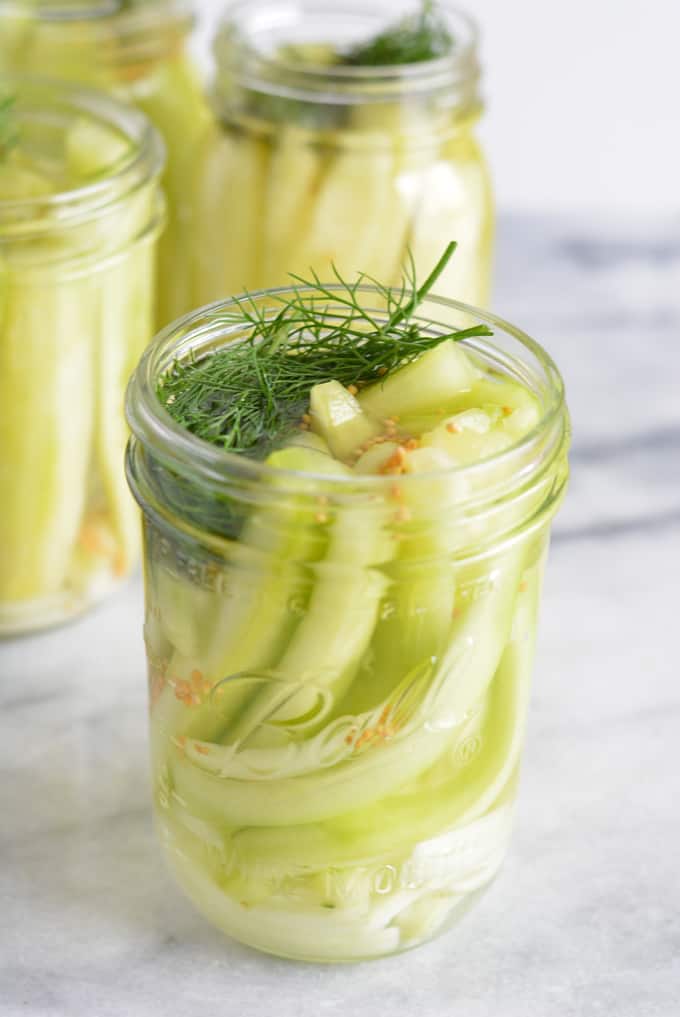 My first memories of helping in the kitchen are baking brownies or cookies with my mom. I don't consider myself a baker now. Many of our family recipes do not revolve around baking, so I did struggle with figuring out what to share this month.  After eating some of my recent batch of pickles I realized that my grandfather's Senfgurken (or German Pickle) recipe was perfect.

Senfgurken is a German pickle that uses mustard, dill, and possibly other spices.  These particular pickles are peeled before they are placed in the pickling brine. These pickles are basically refrigerator dill pickles. There are also commonly called mustard pickles.

I never made the pickles with him, but we all have his recipe and use it every summer. We were swimming in cucumbers from our garden this year and I needed to do something with them before our vacation in August, so I made a huge batch of pickles before we left.  This year is the first in probably 17 years that I made them.  My husband has been the pickle chef all these years.  I had to ask him a few questions, which felt wrong since this is my Pop-pop's recipe!

My grandfather was so happy when Scott took an interest in his pickles and made a batch himself.  Scott was given Pop-pop's giant glass jar that he used when he made large batches. Scott became the pickle chef when the pickle jar was passed to him.

This recipe takes a few days to work through.  I took a picture of each step, so don't freak out because you have to scroll down further for the recipe.

How to make Homemade German Pickles 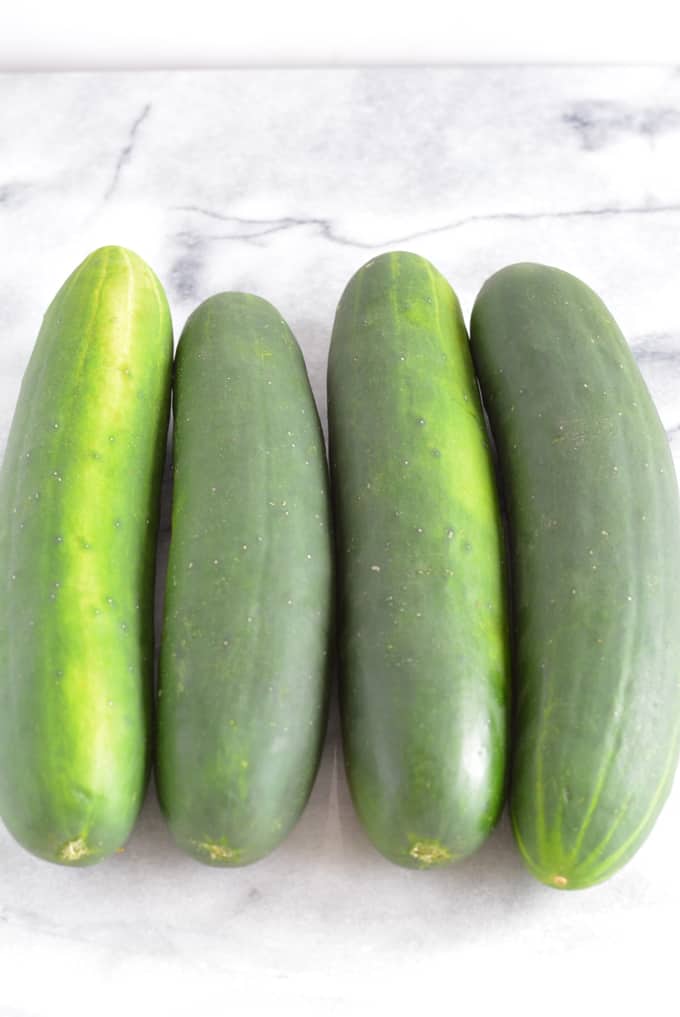 The smallest batch calls for 4 cucumbers.  We have made batches of more than 20 cucumbers before. You don't need pickling cucumbers. We use regular cucumbers. The bigger the better. 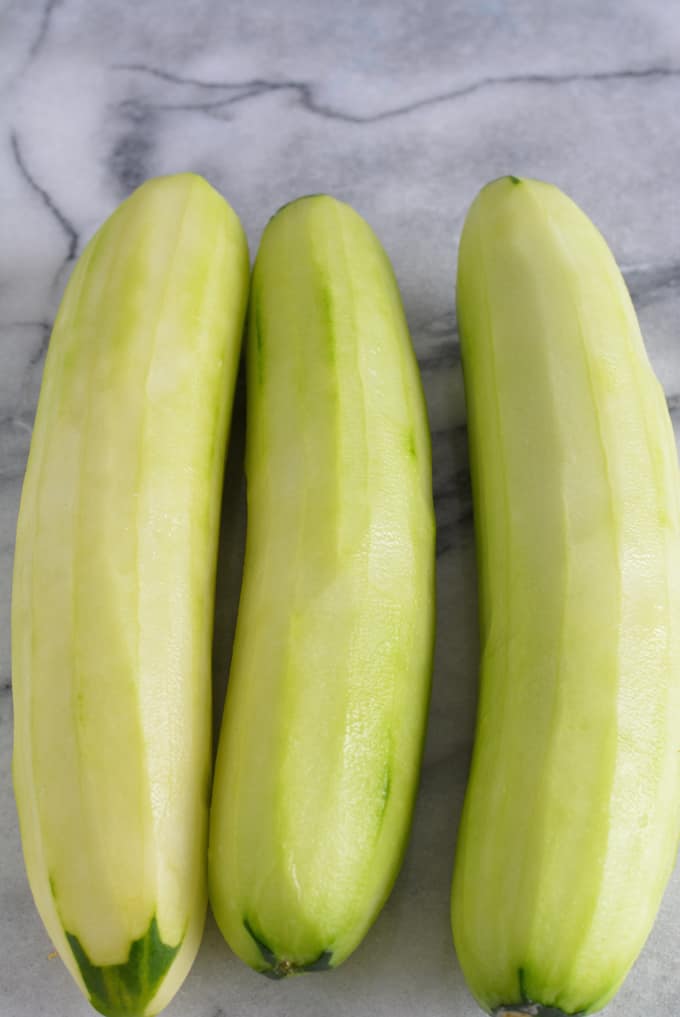 Start by peeling off the skin.  Remember Senfgurken are peeled. After you peel the cucumbers slice them into four chunks. I cut them in half in the center and then cut each half in half again lengthwise. 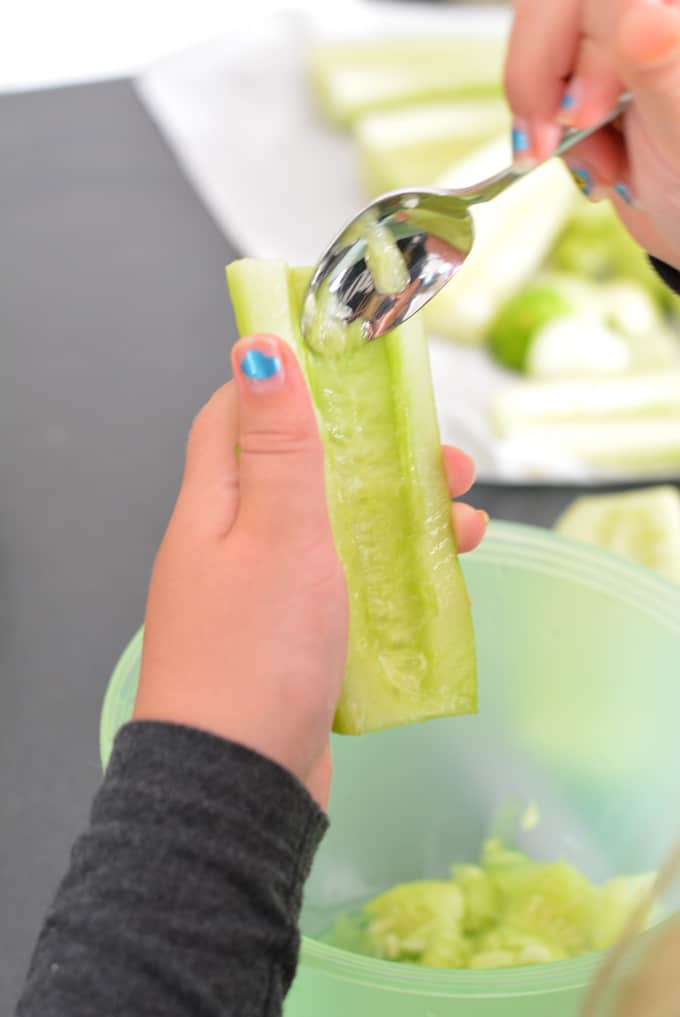 The seeds are removed.  The best way is to use a spoon to just scoop them out.  This task can get a bit messy.  My daughter and I had some seeds that ended up on the floor and on our clothes.  You can see I have a garbage bowl to put the seed into, but they still get away from you. 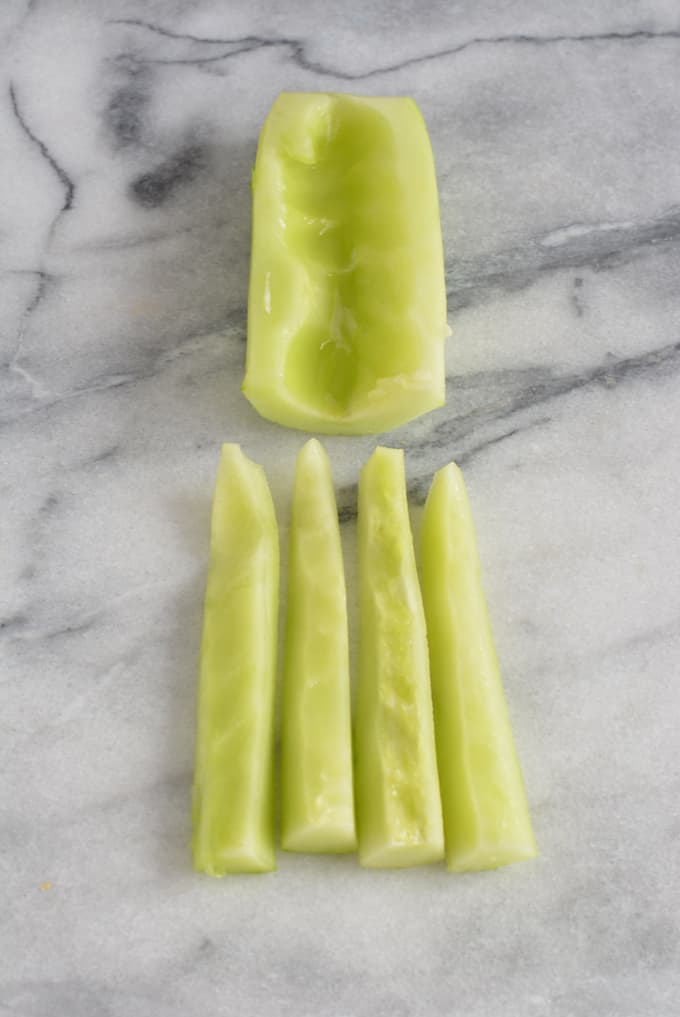 Each cucumber section is then cut into smaller strips (about a ¼-1/2 inch thick).  You should get four slices per section. 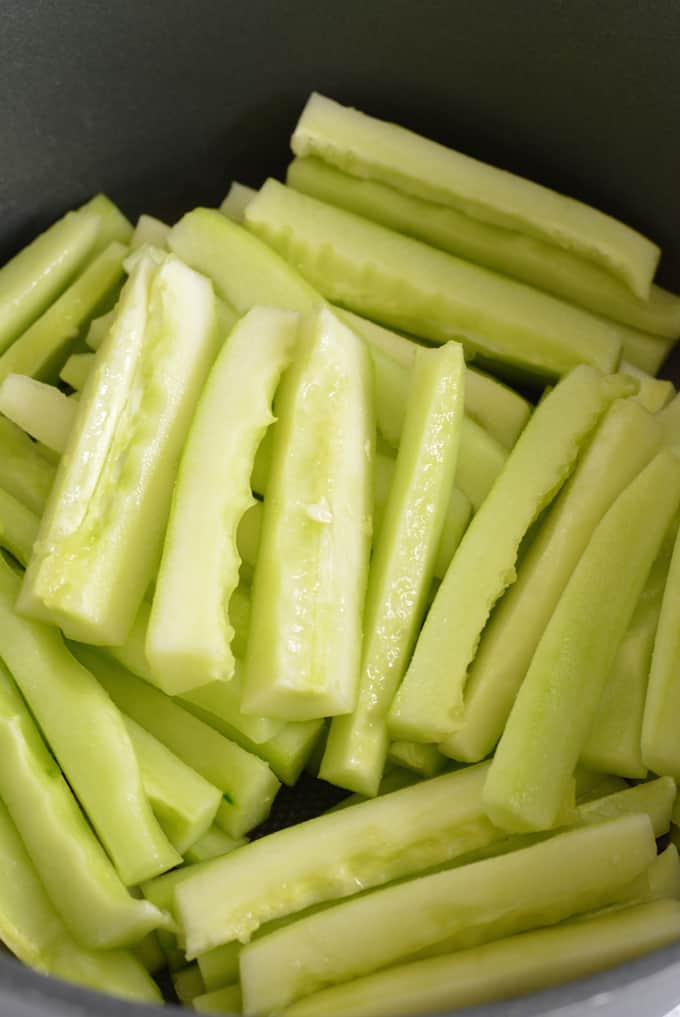 Layer the cucumber slices into the bottom of a large pot.  Salt each layer before starting a new one. The purpose of salting is to draw water out of the cucumbers. 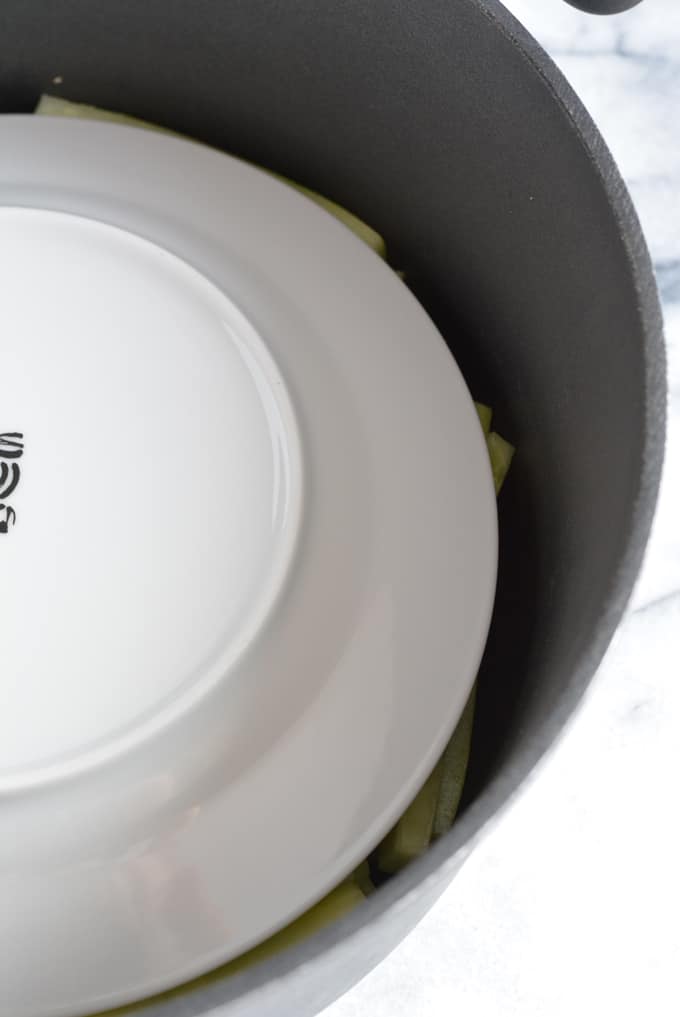 To increase the release of water we add a plate and some sort of weight on top of the cucumbers.  My grandfather used a brick on top of a plate if I can remember correctly. 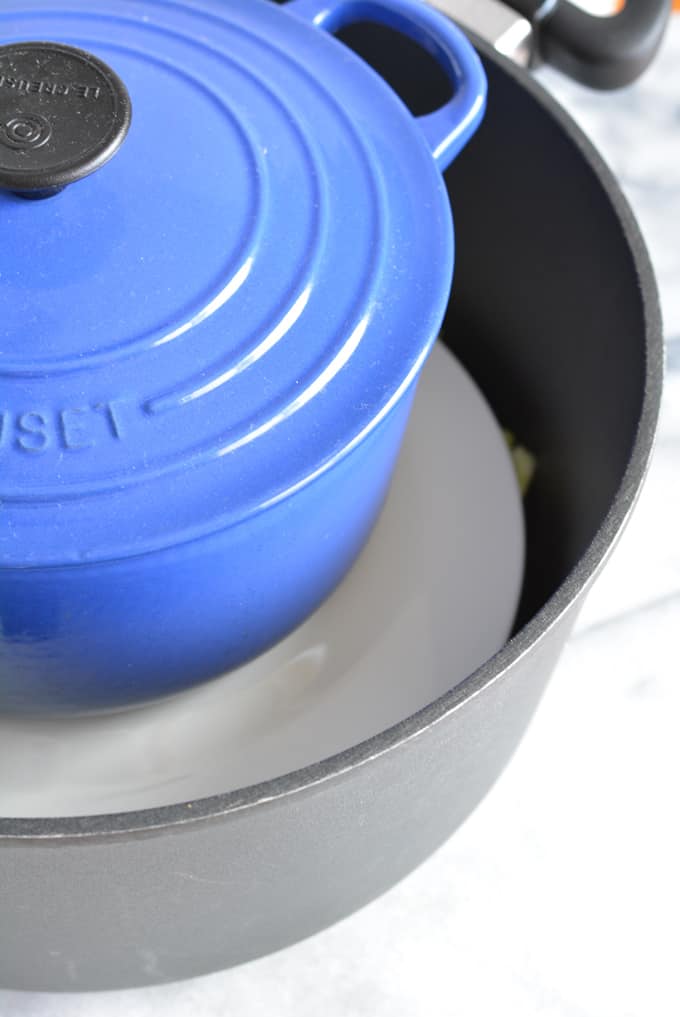 I don't have a spare brick laying around.  The heaviest item I can find that would fit in my pot is my small Le Creuset pot.  Grandpa's directions say to place your pot of cucumbers into the refrigerator for 24 hours. We prefer 48 hours. The longer time frame allows more water to be excreted. 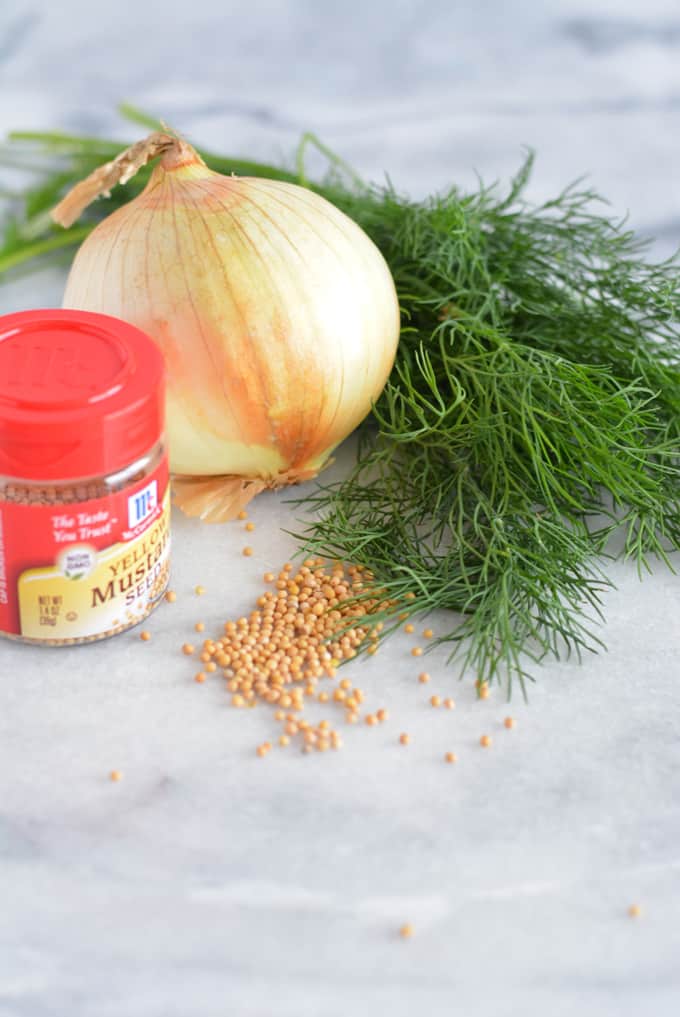 Our Senfgurken recipe uses only mustard seed, dill, and onion to flavor the pickles. Some recipes may use prepared mustard and/or pickling spices. 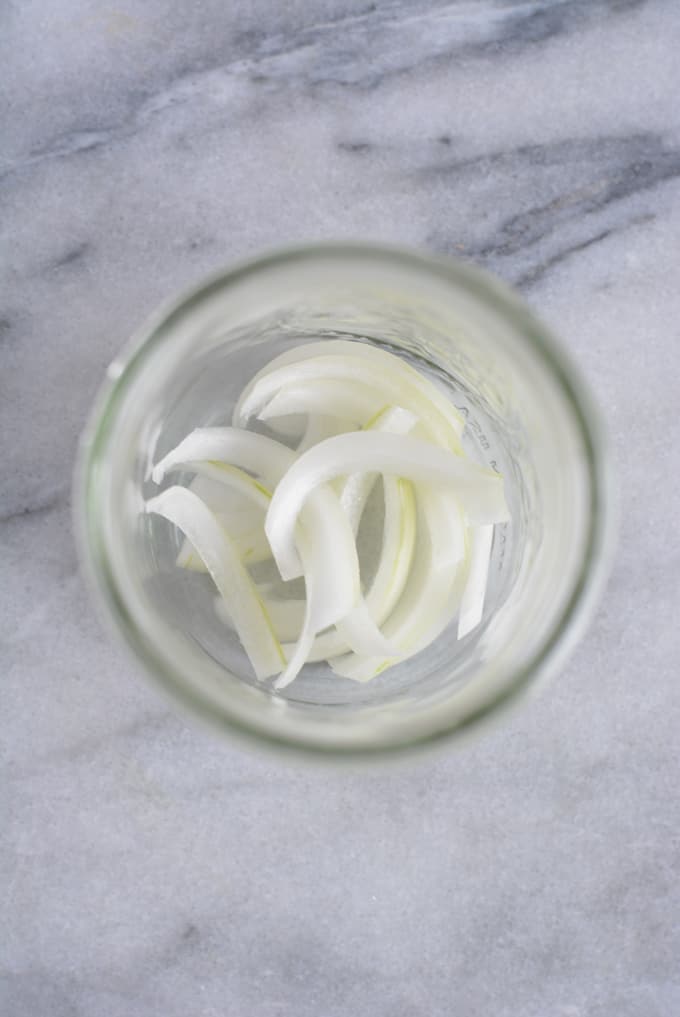 First, place onion in the bottom of your jar.  I divide the onion slices evenly among my jars. You may not use all the onion that is sliced, but better to have extra. 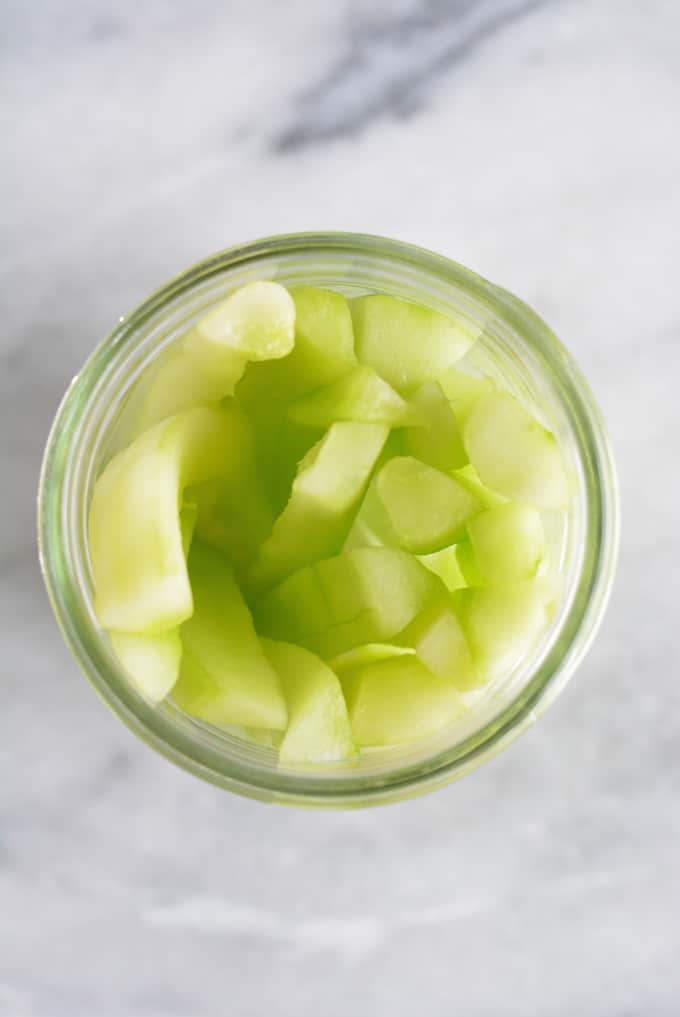 Place cucumber slices in the jars leaving some wiggle room. 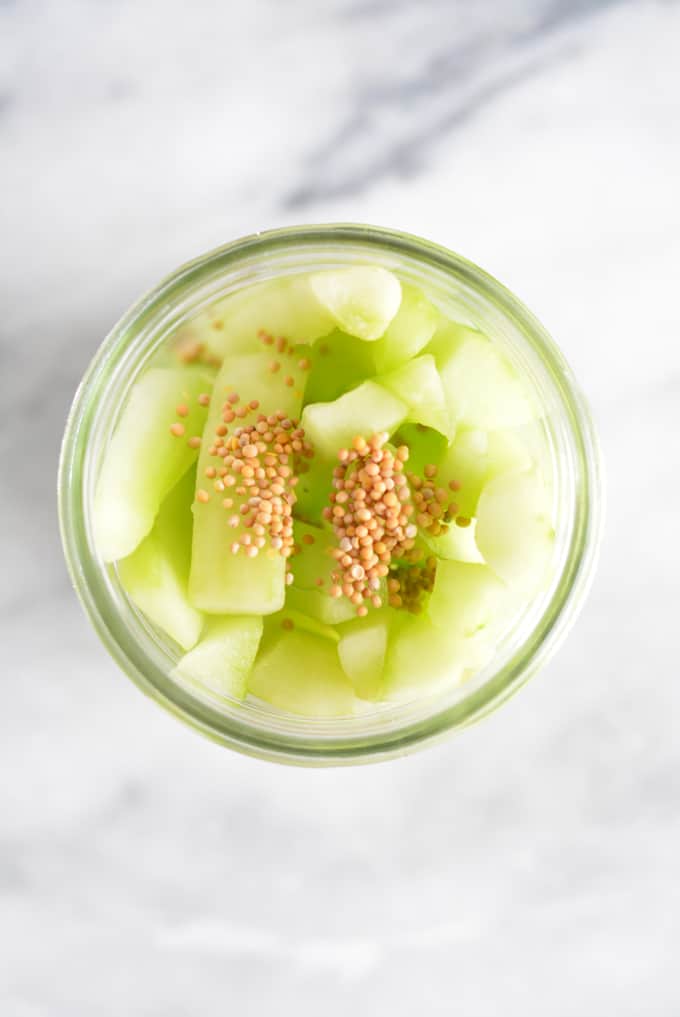 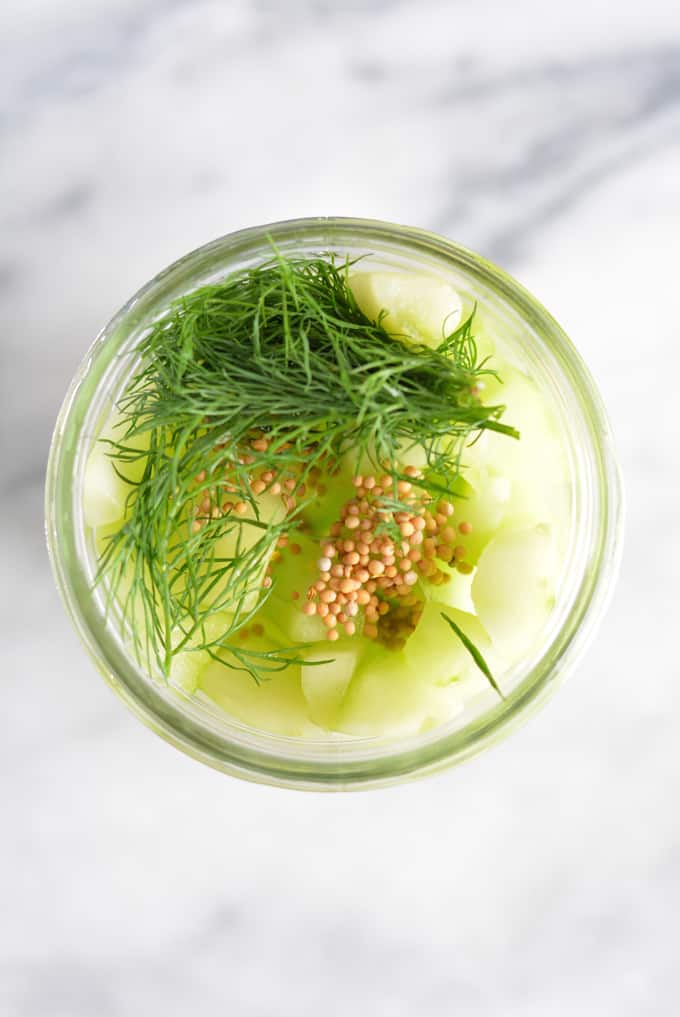 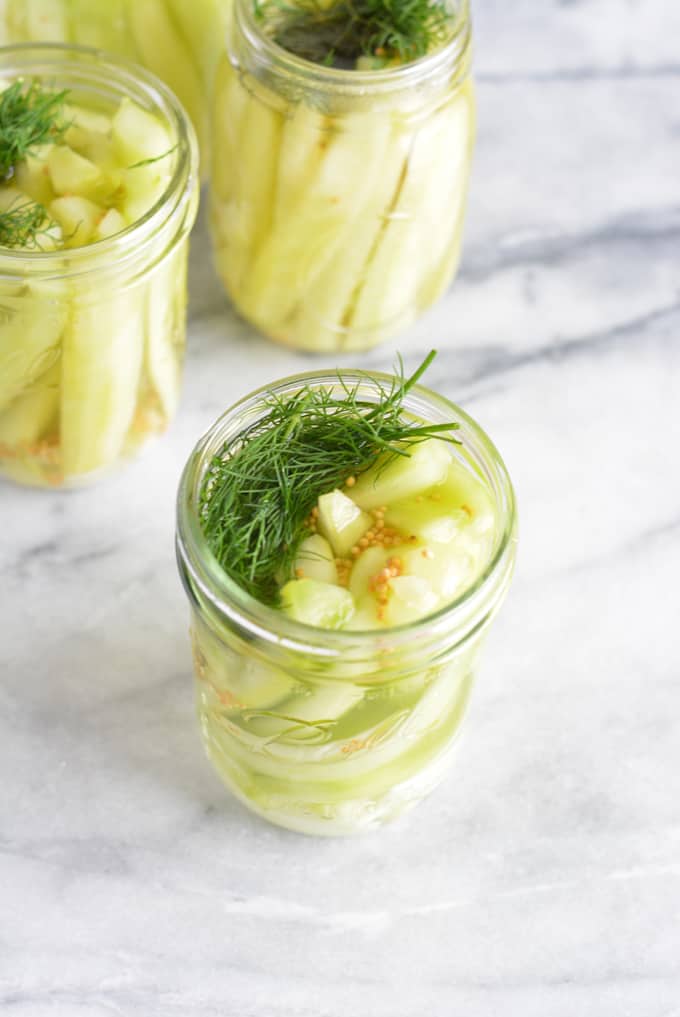 The hot pickling liquid is added last and divided among the jars.  Let the jars cool down before adding the lids and transferring the jars to the refrigerator. The pickles will keep in the refrigerator for a while.  We have found jars that were a year old and the pickles were still good.  The only time we have pickles that long is after we made a huge batch. 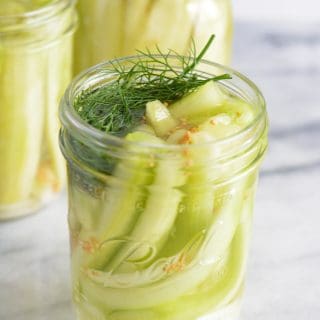 These pickles are perfect with sandwiches and burgers: