This year I attempted to grow eggplant.  I grew about a half dozen small eggplants from two plants.  That's not too bad for a first attempt.  I usually make eggplant roll ups, however the variety I grew was much smaller and difficult to roll up!  So, I decided to grill the eggplant for a meatless, Grilled Eggplant Sandwich. I grew a small Asian style eggplant, called Calliope.  I actually forgot what I planted, so was waiting for the eggplant to get bigger.  When I noticed the first two vegetables were turning yellow I realized they were not getting any bigger. I think they are kind of cute. What do you think? I don't really think that eggplant has much of a flavor.  Before grilling the eggplant slices I added some fresh herbs from my garden and olive oil and let the eggplant marinate for a bit.  Some of the herbs were also grilled with the eggplant as well. I don't consider myself a vegetarian, but I can do without meat.  I need to be in the mood to eat meat.  Sandwiches most commonly contain some sort of meat to make them more filling to me.  This grilled eggplant sandwich is just as filling, but meat free. I stay away from our outdoor grill.  My husband it in charge of the grill.  He has showed me many times how to operate it, but I never remember.  I just don't want to be bother with it, so I really don't listen when he gives me instructions.  My kids do the same to me when they don't want to do something! A meal should contain both protein and carbohydrates.  This is optimal for satiety and blood sugar regulation.  (This is your nutrition lesson for the day!).  Any cheese would taste great in this sandwich, but I chose Feta to give the sandwich a Mediterranean flavor.  I had extra cut herbs, so I marinated the feta in a bit of olive oil an herbs too. Adding cheese still makes this a vegetarian sandwich, but not a vegan sandwich.

You can grill the eggplant ahead of time and keep the grilled eggplant in the refrigerator for quicker meal prep throughout the week. 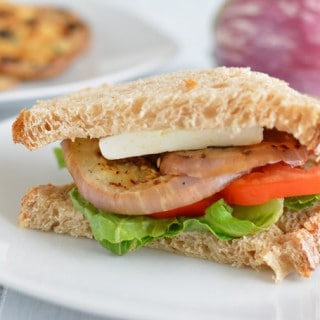