There are many nights where we need a really quick dinner. Dealing with work and school activities leaves me with little time to make dinner every night. That's why in our house we tend to make a lot of quick under 30 minute dinners with few ingredients.  This 30 Minute Garden Chicken with Linguine recipe only requires 7 ingredients! It has been many years since I have actually made this recipe. I made it quite a few times when I was living at the beach when I was in college (many moons ago).  When the topic for this months Recipe Redux came out, this recipe was first on my list.

It’s Income Tax Season, so our brains could use some easy arithmetic; as in seven-ingredient-or-less recipes. Show us the healthy, no-brainer dish you fix for breakfast, lunch or dinner. Think beyond smoothies or drinks, please. (And for those of you living in countries where it’s not Tax Season – we’re pretty sure you and your readers would still love doing the math for seven-ingredient-recipes!)

I don't remember exactly where this recipe came from, but I think it was out of a magazine or the coupon section of the newspaper.  The basic recipe was simply chicken with linguine and diced tomatoes.  The recipe has of course evolved and I have added my own twist to it.

It is a very simple recipe that can be put together quickly, especially if you use a few shortcuts. To speed up cooking time I purchase mushrooms are already sliced and baby spinach that ha smaller leaves that don't need to be chopped up.  The little prep the veggies require can be done as soon as you start to cook the chicken. When the chicken is done you can add the veggies and tomatoes and dinner is done! This is a perfect recipe to add lots of extra veggies to. A lot of my clients have difficulty trying to fit in veggies.  Recipes like this are really simple ways to incorporate lots of different vegetables in one dish.

I think what takes the longest in this recipe is for my water to boil for my pasta. The first thing I do to begin this recipe is always to fill up my pasta pot with water and start to heat it up. While the water is boiling I'll heat up a tablespoon of olive oil so I can begin to cook the chicken.

I try to use vegetables that cook fairly quickly. For example, my favorite veggies to use are Portabella mushrooms and spinach. Both veggies only take only a few minutes to cook. I can usually have this recipe cooked and on the table in under 30 minutes. If your stoves a little bit better than mine and you can get water to boil a tad bit faster you can probably get this recipe on the table in 20 minutes or less. Do you get the idea that I need a new stove?! When we move six years ago I left my brand-new stove behind. The stove had a turbo boil setting, so I didn't have to wait long for water to boil

For the past six years I've been using the stove that came with our house, which is about 15 years old. We've been slowly switching out appliances. This year we had to buy a new refrigerator. Then my husband decided to replace the dishwasher, so it would match the refrigerator. Then our microwave broke, so that's been replaced.  All that is left is the stove! 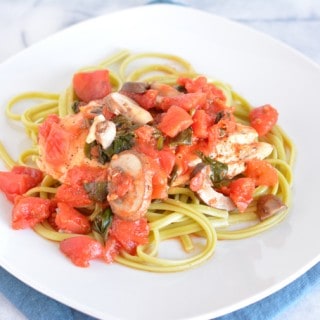