Wouldn't you love to wake up on Thanksgiving morning to the smell of warm Pumpkin muffins?  Add these pumpkin pecan muffins to your holiday breakfast menu. Pumpkins are the symbol of Fall and Fall events like Halloween and Thanksgiving.  Many Thanksgiving dishes include pumpkin as an ingredient.  I have to be honest, I tend to shy away from pumpkin.  I have come to realize that it's more of the pumpkin spice that I dislike, not the pumpkin itself.  Pumpkin spice is made of cinnamon, ginger, nutmeg (or mace), cloves, and allspice.  I think allspice is what I dislike the most. A few weeks ago the hospital cafeteria featured a pumpkin day.  They served pumpkin coffee, pumpkin bread, pumpkin pie etc.  I taste tested a sample of pumpkin bread and loved it because it was not overly spiced.  I felt that I could replicate this flavor in muffins.

I used to be called the food lady.  With all the muffin recipes I keep posting I may become the muffin lady!

I used some of the spices traditionally used in the pumpkin spice, but not all.  I love cinnamon and nutmeg, so there was no question about using either.  I omitted ginger and cloves but kept in the allspice. The allspice was though limited. 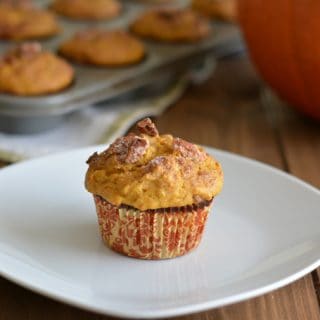