Potato month is winding down.  Potato leek soup is one of my son's favorite soups.  His first experience with this type of soup was in Disney World.  We have be lucky enough to visit Disney World numerous times.  During the last two trips we have dined at Be Our Guest, where potato leek soup is served.

I was surprised when he ordered the soup and had a feeling I was going to be eating it.  TJ surprised us though and loved the soup.  This version is similar to the Be Our Guest version.  My first attempt though was a fail.  I originally added some white wine, which I though a nice addition, but TJ refused. Leeks are like giant scallions. Stores usually sell them as a bunch of three. I found the leeks for the recipe I photographed at a local market. These leeks were smaller, so came 6 to a bunch. Chopped up you end up with about 3 cups of leeks. You only use the white sections. I can not wait until warmer weather when I can put scraps in my composter. It was been too cold and snowy to go outside to toss the scraps.

You need to really let the leeks sweat to soften them up. The potatoes are added along with the broth to finish the cooking process.  I always cut up the potatoes to speed things up. 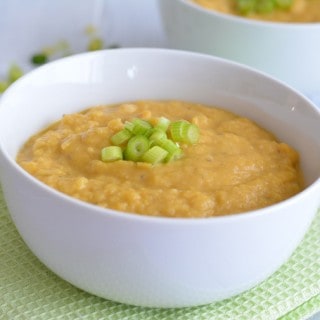